Nerf Guns Are A Real Risk To Eyes 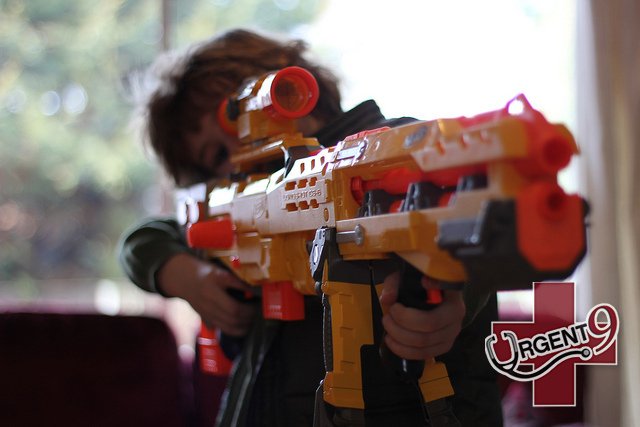 Nerf toy guns have been wildly popular since the 1970s. But as data accumulates, doctors are beginning to see a very real correlation between these toys and eye injury. Here’s what you should know before letting your kids loose with Nerf toys!

“You’ll Shoot Your Eye Out!”

It’s become almost a common joke, at least as old as the classic movie A Christmas Story – giving a child access to a projectile toy, even one as seemingly harmless as a Nerf gun, can easily result in eye injury. Of course, the hope is that your kids won’t be aiming for each others’ eyes, which are just about the only place the foam Nerf projectiles have any chance of causing real damage. Yet, a new study published in the medical journal BMJ Case Reports has found a short-term uptick in the incidences of Nerf gun-related eye injuries in children. In each case, bleeding in the eye occurred, although at varying levels of severity.

What are Nerf guns, anyway? Nerf has been around as a company since the 1970s, manufacturing toy guns that shoot foam projectiles of various shapes and sizes via air pressure. To their credit, Nerf has undergone decades of testing and refinement to make their products as safe as possible for kids to use. Still, for a company that sells $400 million worth of toy guns each year, that’s a whole lot of kids using them, and by extension a whole lot of opportunities for something to go wrong. The foam used in Nerf guns is incredibly light and soft, but it does leave the gun at a reasonably high velocity — enough to cause damage to our extremely sensitive eyes.

Specifically, the study mentions that each serious eye injury they looked at was the result of a Nerf gun hitting a child’s eye from a very close distance. So in other words, these incidents did not occur under “normal” use of the toys, such as from a few feet away or from across the room. Rather, they were a result of intentional or unintentional firing at “point-blank” range. In the least serious case, doctors observed bleeding under the conjunctiva (the white part of the eye). As far as eye injuries go, this is reasonably common and not particularly serious, though it can be unsightly (no pun intended) and uncomfortable. However, doctors also observed Nerf injuries resulting in bleeding between the cornea and iris, which can eventually cause glaucoma as the child grows older.

Eye injuries in children need to be monitored frequently by medical professionals during the early stages of the injury to ensure that complications do not develop. Remember that pediatrics is not just a branch of medicine for doctors who like to treat kids — it’s an entire field specialization because of the complexities inherent in treating bodies that are still growing and changing rapidly. Kids often aren’t able to self-heal as well or as straightforwardly as adults are, so it’s necessary to stay on top of treatment when they’re injured or ill.

So, are we recommending that you ban Nerf guns from your household and not let your children play with them? Well, not quite. In truth, if the toys are used to the manufacturer’s specifications, they’re quite safe, and these accidents seem to be rare when you consider how many Nerf guns are out there in American households. However, we do recommend a happy medium: if you’re going to let your kids play with Nerf guns, insist that they wear eye protection. That way, you take risk out of the equation altogether, and can worry about something else instead… like how fast they’re growing up!